From bridges to highways to scaffolds, army ants know how to engineer a solution.

Learn how army ants engineer as a team to sustain their life in this mesmerising resource for Year 5, 7 and 9 Biology and Physics students.

Army ants (Eciton burchellii) are known for their vast foraging raids. Hundreds of thousands of ants flow like a river from their nest site, scouring the jungle as they prey on anything unable to escape the swarm.

These raids are enormous undertakings. A single raid can be 20 metres wide and 100 metres long, comprising more than 200,000 ants, running at 13 centimetres per second, and gathering up to 3,000 prey objects per hour.

To ensure traffic flows efficiently, army ants construct highways and bridges along the rough forest floor. These structures are built entirely out of worker ants that join their bodies together.

How these tiny, blind ants manage to coordinate these dynamic constructions remains largely unknown, but a new study brings us closer to the answer.

Research published in the Proceedings of the National Academy of Sciences describes, for the first time, a type of self-assembled ant structure called a “scaffold”.

It also introduces a mathematical model for how scaffolds are formed, which could have implications for several fields of engineering.

The research shows scaffolds act like a safety net for foraging army ants. They prevent walking ants from slipping and falling when their trail runs along steep ground.

The authors stalked the forests of Panama to find ant swarms, then redirected their trails along a platform that could tip between 20 and 90 degrees from a horizontal position.

The ants rarely formed scaffolds on slopes less than 40 degrees steep, while steeper inclines led to larger and faster-growing structures. Scaffolds were also more likely to be built when many workers were transporting heavy prey items.

And once a scaffold was in place, the number of falling ants would drop nearly to zero — even across a vertical surface.

Ants are masters of collective architecture. Several species are documented to self-assemble into functional structures to overcome challenges in their habitats.

For instance, weaver ants (of the genus Oecophylla) line up in teams to form “pulling chains”, acting as living winches to bend leaves together when building their treetop nests.

Entire colonies of fire ants (Solenopsis invicta) escape flooding by forming floating rafts that can sail for several days, until the water retreats and the colony can safely land ashore.

Army ants (of the genus Eciton), however, have mastered this ability and extended it to almost every aspect of their biology. Along a single foraging raid, army ants can form hundreds of pothole plugs.

Their bridges, which span several ant body-lengths, help ease their passage over the irregular ground of Central and South America’s rainforests. At the end of each day the entire colony self-assembles into a huge hanging nest called a “bivouac”.

The recent study adds “scaffolds” to the existing list of structures built by army ants to sustain their fast-paced lifestyle.

Self-assembling into structures which are orders of magnitude larger than an individual requires an extreme degree of coordination.

Strikingly, this is achieved without any leaders or external blueprints. Each individual can only respond to local interactions with its neighbours and changes in the environment.

Discovering how these one-on-one interactions among individuals lead to complex group formations presents a challenge for biologists, and a golden opportunity for engineers.

Working on yourself for the good of the team

Scientists have a name for when relatively simple animals display sophisticated behaviour at a group level: “emergence”.

Take the mesmerising undulations flowing through groups of starlings as they evade predators in the air, or the lightning-fast escape waves seen in schools of fish. Such coordination was once thought to be the result of telepathic communication between group members.

Scientists now know simple one-on-one interactions can add up to more than the sum of their parts, explaining much about group-level patterns. But they’ve yet to fully understand how information at an individual level is combined and filtered to translate to a group-level response.

The recent research on army ant scaffolds provides new insight on this front, by developing a theoretical model of scaffold construction that centres around a simple mechanism.

That is: ants can sense how much they are slipping, and are more likely to stop and join scaffolds when their rate of slipping is high.

The ants don’t have to communicate with each other or assess the size of the structure. The properties of the group are modified simply by individuals sensing and correcting their own errors.

The ability to form complex, adaptive structures using a minimum amount of sensing and information processing is extremely valuable to many engineering fields.

It could assist with the rapid production of biological products (biofabrication), designing self-healing materials such as metals or plastics that repair themselves when damaged, and in swarm robotics.

For instance, a swarm of simple, cheap and largely expendable robots could be deployed to autonomously explore dangerous environments such as disaster zones.

The swarm could self-assemble into structures that may help it bridge large gaps, or shore up a crumbling building – all the while locating and rescuing survivors.

Crucially, these abilities wouldn’t need to be explicitly programmed into the robots’ behavioural repertoire.

Rather, the abilities would “emerge” from simple rules about how the robots should interact with each other, allowing the swarm to adapt to new environments like never before.

Diversity in engineering with Leeanne Bond 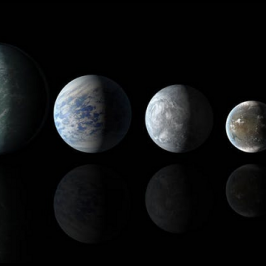