Scientists reinterpret rare and ancient footprints from the ancestors of crocodiles.

This resource is suited to students in years 3, 4, 7, and 10 studying Biology or Earth and Space sciences. It looks at the evidence for evolution and the implication that the find has on our understanding of the ancestors of crocodiles.

Ancient relatives of modern-day crocodiles might have walked on two legs, researchers say.

They now believe footprints discovered in South Korea and thought to have been made by giant pterosaurs were in fact left by a new species of crocodylomorph they have named Batrachopus grandis.

That would mean not only that these early crocodiles could walk on two legs, but also that pterosaurs in fact didn’t, supporting “the general consensus of those studying trace fossils that pterosaurs walked using all four limbs”.

And that, they suggest in a paper in the journal Scientific Reports, highlights the need for re-examination of other morphologically similar specimens from this period in history.

Multiple sets of footprints were found during excavation at the Sacheon Jahye-ri site near Sacheon City. The tracks are more than twice as large as previously discovered batrachopodid tracks, with some footprints up to 24 centimetres long, indicating a body length of up to three metres.

The narrow trackways were made entirely by the back limbs, with clear heel to toe impressions and skin traces in some areas, but there is no definitive evidence, either from back footprints covering those made by the front feet or poor track conservation, to suggest the trackways were made by a four-legged crocodylomorph.

“Typical crocodiles walk in a squat stance and create trackways that are wide,” says Kim said. “Oddly, our trackways are very narrow looking – more like a crocodile balancing on a tight-rope.

“When combined with the lack of any tail-drag marks, it became clear that these creatures were moving bipedally. They were moving in the same way as many dinosaurs, but the footprints were not made by dinosaurs.

“Dinosaurs and their bird descendants walk on their toes. Crocodiles walk on the flat of their feet leaving clear heel impressions, like humans do.”

The footprints have been dated to between 110-120 million years ago, but the real bonus is their number and quality.

“Fossil crocodile tracks are quite rare in Asia, so finding an abundance of nearly 100 footprints was extraordinary,” says co-author Anthony Romilio from Australia’s University of Queensland.

“As an animal walks, the hind feet have the potential of stepping into the impression made by the hand and over-printing’ it, but we find no evidence of this at these Korean sites.

“It isn’t due to poor preservation either, because these fossils are spectacular, they even have the fine details of the toe-pads and scales on their soles preserved.”

Looks can deceive: crocodiles have evolved more than we think

‘Wonderchicken’ fossil from the age of dinosaurs 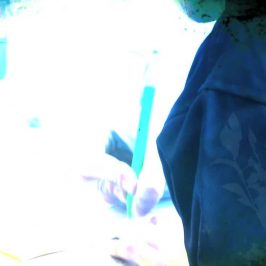